A WEG SSW7000 medium voltage soft starter has ensured improved starting as well as lowered energy costs for a rod mill at a process plant in Mpumalanga. This installation formed part of an upgrade which also saw a 450kW 8 pole 6600V WEG W50 motor being installed at the plant. 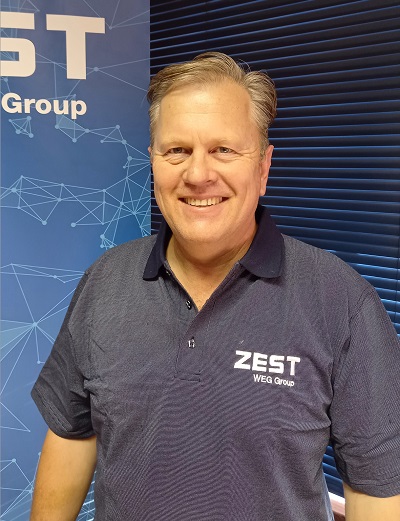 The plant had recently upgraded to a 450kW, 8 pole, 6600V WEG W50 motor, which was started by a direct online starter.

According to Fritz Hoogenboezem, branch manager at Zest WEG Middelburg, the soft starter was imported into South Africa from WEG’s Brazil factory in time for the plant’s scheduled shutdown and was installed by local systems integrator Umagezana Engineering.

“By avoiding the sudden in-rush of current when the motor is switched on, the soft starter reduces both the mechanical stress on equipment and the peak load drawn from the national power grid,” says Hoogenboezem.

There is a direct financial benefit to be derived by the customer if their peak consumption reduces to a lower peak demand value. This is because exceeding the maximum demand – as can occur when a large motor starts up – leads to costly penalties being applied by the power utility. The in-rush current to start a heavy-duty load can, in those first few milliseconds, be seven to ten times higher than the level at which the motor is specified.

“By exceeding the maximum demand, the plant could pay much more than necessary for its power consumption, not just for that month but for 12 months afterwards,” he says.

The installation of the soft starter was a complex task, according to Umagezana Engineering director Ernest Bean. Once they removed the direct online starter, it was clear that the cable lengths would not fit directly onto the new soft starter.

“This required changes to be made with the motor control centre (MCC) on the high voltage side,” says Bean. “The different cable lengths meant that cables had to be re-terminated to ensure safe and compliant operation; nine cores or phases were terminated.”

Another challenge was that the door to move the equipment in and out was not wide enough. This required specialised rigging to be carefully planned and conducted, as the WEG SSW7000 soft starter weighs almost a tonne.

Once the new equipment was installed and connected, Zest WEG’s qualified drives and automation technician Reiner Gundlach assisted with the cold and hot commissioning. Extensive tests were run in accordance with WEG’s detailed OEM specifications, laying the technical foundation for the optimal performance and lifespan of the equipment.

“As a sophisticated medium voltage item, there are numerous aspects that need checking and testing,” says Hoogenboezem. “The results are then communicated with WEG as part of our rigorous quality management procedures.”

Bean highlights that, as a technician in the field, he was impressed by the smart use of fibre optics between the control section and the high voltage operational side. In particular, the functionality test in the soft starter’s software is able to test each individual fibre optic cable using a control voltage of 230 volts, before the system is opened to the full 6600 volts used for operations.

“Among the other benefits of the soft starter is its monitoring functionality, which allows the plant management to closely track the interaction between the motor, the soft starter and the plant PLC,” he says. “Management can at any time log into the PLC and use that interface – together with the soft starter – to view important information such as tonnages processed, and the number and duration of stoppages.”

Umagezana Engineering was appointed by Zest WEG as a distributor for the WEG low voltage switchgear range in January 2021. Its whole team has also recently completed the required MV training for high voltage terminations and cable joints, which was done through a specialist firm accredited by the Energy and Water Sector Education Training Authority (EWSETA).