The cause of premature bearing failure

Premature bearing failure is often blamed on ‘white etching cracks’ – but looking deeper for the true underlying cause will lead to a more effective solution, says Erik Vegter, senior scientist for fatigue modelling and testing at SKF.

Modern manufacturing practices, and techniques such as predictive maintenance, have helped to make premature bearing failure a rare occurrence. However, it can still happen and, when it does, can have a catastrophic effect. 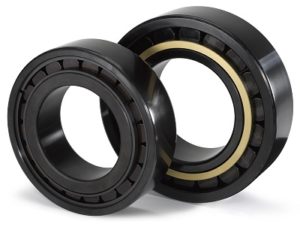 Some applications, such as wind turbine gearboxes, have shown to be more prone to early bearing failure than others. The important thing for customers is to diagnose the failure and correct it. However, there has been plenty of debate over the exact causes of early bearing failure.

One common feature of premature failures is a network of small, white decorated cracks below the surface of the bearing, so-called ‘white etching cracks’ (WECs) or small axial cracks visible at the raceway surface. At first sight, it makes sense to assume that these are the cause of the problem, as they are seen in most cases of premature bearing failure.

However, an extensive, four-year research project carried out by SKF has shown that, in reality, these cracks occur at the end of the failure chain and are a natural consequence of crack networks in prematurely failed bearings. The company’s specialists concluded that WECs are only a visible symptom of the failure, and not part of the underlying cause.

SKF has so far identified seven mechanisms that cause premature bearing failure, leading to one common result: shorter bearing life as well as the appearance of WECs. Therefore, SKF has developed a scheme to classify premature bearing failures, to help application engineers work together with customers to find the true root cause of the failures and, consequently, the most appropriate solution.

Despite this new insight, some premature failures are still being assigned to WECs and resolved on that basis (usually by replacing the failed bearing with an identical one). However, rather than needlessly repeating this approach, it is vital to drill down into the problem and pinpoint the underlying reason for failure. The SKF research has identified a series of underlying causes, allowing more accurate solutions to be found in each case.

The project involved replicating the exact conditions seen in bearings that failed in the field and subjecting them to extensive laboratory tests (including optical and scanning electron microscopy, and ultrasonics). Making the bearing fail under controlled conditions, helped SKF to pinpoint exact failure mechanisms, allowing a more accurate and targeted solution to be found to each problem.

For each root cause, SKF systematically reproduced the critical operating conditions on a test rig. This allowed them to know for sure which particular conditions caused WECs and allowed a link between the cracks and, for instance, structural stresses to be proven. The project has allowed SKF to clarify the role of WECs in relation to both classical bearing rolling contact fatigue and accelerated fatigue (accelerated spalling of bearings).

In bearing rolling contact fatigue (where there is no premature failure), WECs are generally caused by cyclic stresses and loading. However, the more extensive appearance of WECs is seen in accelerated fatigue, which can variously be assigned to higher stresses, lower material strength and/or a mixture of friction and lubrication effects.