According to Rajant Corporation, an exclusive provider of Kinetic Mesh wireless networks, and its technology partners Australian Droid and Robot (ADR) and PBE Group, the team have completed the deepest remote underground mine inspection in history.

Using ten ADR Explora XL unmanned robots and a wireless below-ground communication network, a mobile infrastructure depth of 1.7 kilometres was achieved to enable the reestablishment of operations at a collapsed limestone mine and restore jobs.

A limestone mine collapse occurred overseas in August 2021 causing an expulsion of air carrying dirt and rocks that flew out of all portals and ventilation raises. The air was estimated to be moving around 120mph. It was determined that this collapse was caused by the failure of very old pillars (40 to 70 years old) thus creating a substantive surface subsidence. The surface subsidence measured approximately 800’ (ft) across and over 100’ (ft) deep. No one was injured in the incident, as the mine had been evacuated prior to the incident.

Working with the Mining Safety and Health Administration (MSHA), the operator and MSHA determined no one should enter the mine until a safe, unmanned survey could be conducted to assess the conditions of the mine. The solution to achieve this came through the collaboration of the three companies.

Rajant sales director, Todd Rigby, explains, “Prior to the collapse, the mine had a two-way radio system running over a leaky feeder. The leaky feeder was not functional following the collapse, nor did it have sufficient bandwidth to support unmanned robots or drones. The company’s BreadCrumbs were installed by channel partner PBE mostly at the surface of the mine to provide a reliable high bandwidth link from the portal to an emergency operations center overseeing the remote surveying done by ADR and its fleet of all-terrain ground robots equipped with BreadCrumbs.

“The robots initially dragged three network infrastructure points into the mine and then staggered along various routes up to 1.7 kilometres deep. During the longest mission, the robots were transmitting 80 Mbps, and included high-definition video and Lidar to create a virtual 3D model of the mine.”

Dr Joe Cronin, Operations Manager and one of the founders of ADR, added, “Our company keeps a small fleet of robots ready to go out to emergencies, but this was going to require more units with different sensors and capability. 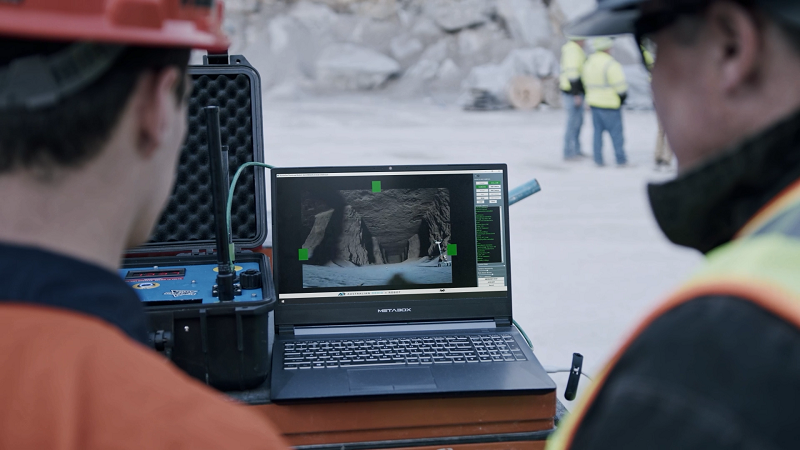 Through partnership and creativity Australian Droid and Robot, PBE Group, and Rajant reach 1.7km to reclaim and restore operations for a collapsed limestone mine protecting lives and jobs. Image credit: Rajant Corporation

“We quickly built more robots and undertook a thorough testing regime to imitate the conditions and distances we would experience in the US. We had teams all over Brisbane, and at one stage, we had robots strung across more than one suburb, controlled from a central location. The robots were shipped to the US less than a month later and were accompanied by Andre Preller, head electronics engineer, and Callum MacDermid, senior robotics engineer.

“After a day of testing on the surface, the robots entered the mine, each robot relaying the communications signal to the next, creating a high bandwidth, daisy-chain network into the mine. A week later, the team had acquired enough data for the mining team to be able to restart operations – the only company globally who could assist with the right equipment in the right timeframe.”

“Before the collapse, PBE was the mines communications infrastructure provider. When we learned about the need for unmanned inspection after the collapse, we focused on finding the best solution for fast, flexible deployment and high performance,” added Rob Koch, director of technology, PBE Group.

“The mine needed a high throughput, flexible data network to support a broad and changing set of inspection deployments. The Rajant mesh technology was the clear choice for this need. In execution, the challenge was to design network elements deployed into the mine by the robots themselves. We moved quickly to source the best antenna technology for the robots and backhaul nodes. Then we went onsite to build the robot deployable nodes and surface network to move data to the inspection operation center. The network and antenna elements provided plenty of time to facilitate the inspection event. We are glad the mine chose PBE on this groundbreaking project to safely bring the mine back into production using the best technology available.”

The mine intends to implement a mine-wide Kinetic Mesh network. In the future, if they were ever to have an issue of instability, they can simply run a single ADR robot into the mine using the preexisting network infrastructure, protecting the sanctity of worker safety and uninterrupted productivity.

Click on the below link to view the exciting video of the unfolding challenge and innovative solution: https://youtu.be/vXAYHSHVHxM