Smart Manufacturing technology has the potential to radically alter the global manufacturing sector, creating gaps for new players in new markets to emerge and dominate in the post-pandemic economy.

According to a new market research report by Meticulous Research, the global Smart Manufacturing market is projected to swell at a compound annual growth rate (CAGR) of 21.5% over the next seven years, to reach a value of over USD446-billion by 2029. The question is, how can emerging economies, such as those in Africa, take advantage of market disruptions to boost local and regional manufacturing?

The adoption of automation and data exchange in manufacturing technologies, including cyber-physical systems, the Internet of things, cloud computing and cognitive computing, and the emergence of Smart Factories, continue to change how the entire manufacturing sector operates globally. The widespread adoption of information and communication technology by manufacturers worldwide is driving competition in an entirely new way, permanently disrupting the playing fields.

Like many other emerging economies, South Africa has a unique advantage over more developed markets because it is not weighed down by infrastructure legacy issues. In addition, the adoption of Smart Manufacturing is unlikely to be hampered by resistance to change as it is in more traditional, industrialised economies.

Currently, the developed world is rethinking much of its existing infrastructure to provide the level of connectivity demanded by IR4 technologies, rolling out internet infrastructure at much the same rate as some emerging economies. In addition, highly industrialised economies are having to rethink their historical dependence on fossil fuels, adding to the burden of updating existing infrastructure and manufacturing techniques to remain globally competitive.

The world’s leading emerging economies have quickly identified the opportunity to level the playing fields in the global manufacturing sector. 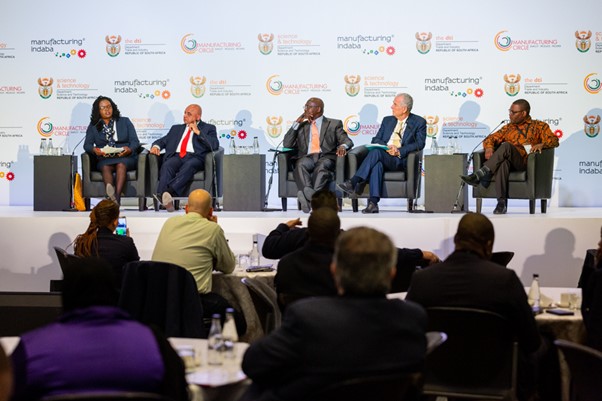 China, the largest emerging economy in the world, stands to become an even more dominant international player due to the adoption of its latest 5-year plan, which hinges on the adoption of advanced technologies to radically transform its manufacturing industry with the view to surge ahead of Western competitors. The South Korean government has also recognised the opportunity, with an investment of WON4.7-trillion (USD3.9-billion) in innovative sectors in its 2020 budget. In Thailand, the National Board of Investment (BOI) approved incentives to encourage companies to speed up Industry 4.0 transformation, and India plans to increase the manufacturing sector’s GDP contribution to 25% by 2025, up from the current level of 16% with the rapid adoption of Smart Manufacturing capabilities.

The South African government has also shown a renewed interest in the opportunities presented by Industry 4.0 technologies over the past few years. President Cyril Ramaphosa has increasingly cited ICT technologies as having the potential to address the country’s stubbornly high levels of unemployment, poverty, and inequality in his SONAs. The President’s commitment to digitising South Africa’s economy culminated in the Report of the Presidential Commission on the 4th Industrial revolution, gazetted in 2020. The report presents a policy framework and sets clear goals for the rapid adoption of ICT technologies in manufacturing, among other sectors in South Africa in the near future. With a clear directive from Government, Smart Manufacturing will need to be adopted aggressively by South African manufacturers wishing to remain competitive both locally and on a global scale.

The question remains, how do we compete while facing the myriad of challenges unique to our socio-economic and infrastructure limitations?

The world has faced unprecedented disruption over the past two years. Many of these unprecedented disruptions, including the Covid-19 epidemic, the global shipping crisis, and the shift to remote working as a new norm, have affected every member of the global community, if not equally, at least simultaneously. As a result, we have a unique opportunity to rebuild simultaneously, and those in the developing world are, in fact, at an advantage.

Smart Manufacturing technology has the potential to radically alter the manufacturing sector, creating gaps for new players in new markets to emerge and dominate. Manufacturers in the South African market are known to be early adopters of new technologies, eager to adopt new ways of doing things to remain agile in an ever-changing environment, setting us apart from those in more traditional, stable markets. The local manufacturing sector has a critical role to play in South Africa’s economic future, so tenuous at the moment, and the availability of Smart Manufacturing technology may be the deciding factor in our future success regionally and on a global scale.

Manufacturing Indaba enables African manufacturers to harness the unique opportunities awaiting them and place them on an equal footing with international economies.

Go to: https://manufacturingindaba.co.za/register-conference-jhb/  for more information.