Resource geologist Ivan Doku has been appointed as country manager for SRK Consulting in Ghana, taking over the reins from well-known local geotechnical engineer, John Kwofie.

Having earned his first degree at Kwame Nkrumah University of Science and Technology in Kumasi, Doku began his career in Ghana before studying further in South Africa and entering the world of consulting. His new role is an exciting opportunity to build on the decade of experience of SRK’s Accra office and to support further growth in West Africa’s mining sector, he said.

“The region has for many years been an exciting destination for mining investment,” he said. “Today, there are many new challenges and opportunities demanding innovative responses – so we need more than ever to be nurturing the expertise of the region’s engineers and scientists.”

Doku’s first steps into the world of industry were not directly into mining. Although he had graduated with a BSc Engineering in geology, the mining industry had slumped at the time and he spent his first working years as a hydrogeologist – travelling the length and breadth of Ghana. The opportunity to study further brought him to the School of Mining Engineering at Wits University in Johannesburg, where he completed his MSc Engineering (Project Management) and his Graduate Diploma in (Mining) Engineering. 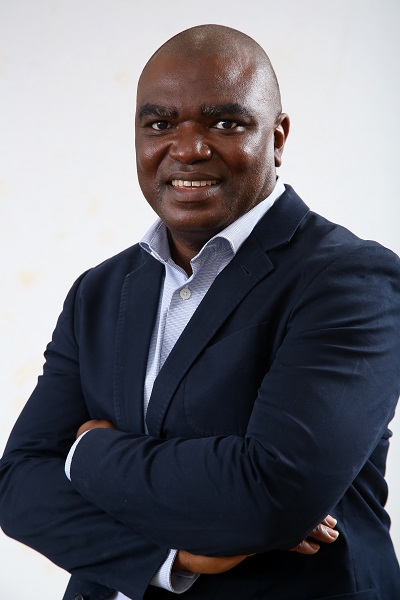 Photography by Jeremy Glyn for SRK in February 2021.

The move to South Africa also allowed him to pursue his fascination with deep-level gold mining, spending over five years in a couple of the world’s deepest and most demanding mining environments – Driefontein and South Deep.

“It was here that I was exposed to the insights that engineering consultants brought to our operations,” he said. “I realised that I wanted more international experience – to understand and analyse numerous orebodies from basic principles.”

In 2012, he spread his wings and joined SRK Consulting, where he is now an associate partner and a principal resource geologist. He takes leadership of the Ghana office at a time when the market is undergoing interesting changes.

“In the early 2000s, it was the major miners and the mid-tier companies that still dominated the sector in Ghana and West Africa more generally,” he said. “In recent years, however, many more smaller explorers and mining firms have appeared, especially in those countries where many larger orebodies have been extensively mined but there are still opportunities in small targets.”

Many of these junior players lack the expertise and the resources to conduct their own exploration programmes to prove and quantify their deposits. Nonetheless, they need high quality studies that will deliver reliable data on resources and reserves; only on this basis can they realistically pursue finance-raising efforts or joint ventures.

“A key aspect of SRK’s success has always been to understand local conditions wherever we work, by embracing and developing local expertise,” he said. “We are therefore looking at innovative ways of engaging with this important junior segment – from which we receive regular requests – to propose and design cost-effective solutions without compromising quality.”

Many of the small-scale mineral opportunities being exploited are not well quantified or understood in geological terms, for instance. They may continue in an informal fashion, but the full value of the resource is not realised – and its benefit to the host country and community is also therefore limited.

“An important aspect of our work is to apply a more sustainable approach to minerals development,” said Doku. “Going beyond the environmental concerns to the social impact is now vital – which means shared value from mining among all stakeholders; local companies must play a greater role in the sector – from the miners themselves to the suppliers.”

His vision for the SRK Consulting Ghana office also includes the engineers of the future. With West Africa’s long history of mining and related training institutions, he looks forward to more local engineers and scientists being developed to serve the sector at all levels.

“As SRK we continue to be committed to skills transfer and nurturing of as many junior engineers as we can,” he said. “Our global network has much to offer in terms of experience and global standards, not just in mining engineering and the geotechnical discipline but in the range of disciplines that are deployed in a modern mine.”

SRK has 45 offices worldwide, in which it employs over 1400 professional staff in fields related to mining, environment, energy, water and infrastructure.