South Africa’s exported bulk mineral tonnages dropped to their lowest level since the Covid-19 lockdown in the first half of 2020, with rail, port and border constraints negatively affecting users of these state-owned services, causing exporters and the country to miss the full benefits of the current high commodity price cycle.

The constraints on exports of coal, chrome, iron ore and manganese are a continuation of the difficulties mining companies and traders experienced during 2021, when they experienced an opportunity cost of R35-billion if delivered tonnages are measured against targets set by Transnet, and a R50-billion opportunity cost if deliveries are measured against the capacity of the rail and port infrastructure and rolling stock. 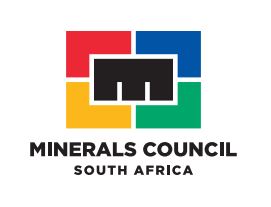 “If there is no change or urgent intervention to address the logistical bottlenecks, the mining industry is likely to incur similar opportunity costs this year, if not surpassing historical losses,” says Henk Langenhoven, chief economist at the Minerals Council South Africa.

South Africa’s mining sector was a critical source of revenue for the fiscus in 2021, playing a significant role in stabilising the economy’s slow recovery from the disruptions caused by the Covid-19 pandemic since March 2020. Mining contributed R481-billion to GDP, up from R353-billion the year before.

Bulk mineral exports in April were at the lowest monthly achievement since 2016 if the Covid-related economic shutdown from March 2020 is excluded. (See graph below.) 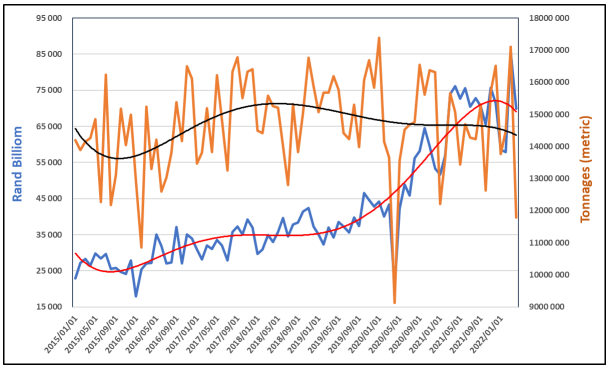 “The rail and port logistics bottlenecks are having a big impact on South Africa’s mineral exports. This worrying trend, which shows no signs of slowing or reversing, underscores the urgency for high-level intervention on the rail network and our ports to stabilise them, return them to productivity and meet design capacity. Only having achieved the latter can we realistically talk about implementing growth projects so the bulk commodity mines can expand,” says Langenhoven.

“Currently, better commodity prices are compensating for underperforming export volumes but the price cycle may reverse, or volumes may deteriorate to such a degree that it negates the price windfall,” he says. In the four months to end-April, iron ore export volumes were 7% lower year-on-year, with the value of sales down by a 25%. Similarly, production was 14% below that of a year ago.

Thermal coal export tonnages were just 8% higher, meaning companies, traders and the fiscus have not fully realised the 150% improvement in coal prices if capacity existed to increase volumes. Production was nearly 3% lower.

Chrome export tonnages are flat at 0.4% below those of a year earlier, while the value of exports climbed by 14%. Production nudged up 2.2%. Producers continue using trucks to export chrome through Mozambique’s Maputo port. Manganese exports grew by 6% against a 23% increase in value. Production was down by 2%. Crime has recently started to influence tonnages transported on rail, which is concerning.

The Minerals Council’s leadership is engaged in high-level talks with Transnet’s senior executives and management about the constraints it is dealing with, and how best the mining industry can assist to resolve these challenges. There are also talks about specific commodities and their associated rail and port links between the Minerals Council, relevant member companies, and Transnet to find solutions in a collaborative manner.

The Minerals Council and Transnet are in regular contact with cabinet ministers and the government’s security cluster to address the sourcing of spares for about 200 locomotives and to tackle crime on the rail network respectively.

The coal industry has invested more than R100-million on security interventions that have proved effective in significantly reducing the number of security incidents on the COALlink network. Chrome, iron ore and manganese miners are in talks with Transnet about extending the private security and technology initiatives to their rail corridors to combat crime that is disrupting exports.

The Minerals Council strongly advocates greater participation of the private sector in operating trains and port facilities to improve productivity, reliability, and stability of the export and import logistics chain to benefit the broader economy as one of the key structural reforms to generate inclusive economic growth and job creation.