Kinross gets certainty about Tasiast

TSX-listed Kinross Gold Corporation has announced that the company signed a definitive agreement with the government of Mauritania to provide enhanced certainty on its Tasiast gold mine in Mauritania.

Mauritania’s Minister of Petroleum, Mines and Energy, Abdessalem Ould Mohamed Saleh, reiterated the government’s solidarity and support for the company during his two-day visit to Tasiast in late June 2021.

During his visit the Minister met with Kinross officials and toured the mine, including the area of the recent mill fire, and was briefed on the progress of the 24k expansion project.

Kinross and the government are focused on the goal of restarting milling operations at Tasiast and are prioritising efforts and processes to achieve this shared objective.

Tasiast Sud is not included in this simplified agreement and is not part of the 24k expansion project, Tasiast’s current life of mine production plan and Kinross’ mineral reserve and resource estimates. Kinross and the Government will continue to focus on the shared goal of restarting the Tasiast mill and discussions respecting the prospective Tasiast Sud area are expected to continue.

“We are pleased to finalise the balanced agreement with the Government of Mauritania to further strengthen our longstanding and constructive relationship,” said J. Paul Rollinson, Kinross Gold President and CEO. “We look forward to continue delivering strong results at Tasiast for the benefit of both Kinross and Mauritania.”

“The completion of this agreement is a testament to the quality of the strategic partnership between the Government of Mauritania and Kinross. The agreement is also indicative of the Government’s commitment and focus on attracting responsible, experienced and long-term private sector partners in Mauritania to carry out projects that advance the country’s development and provide benefits to its people,” said Minister Saleh. 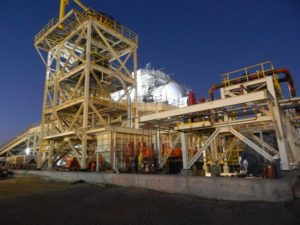