Ivanhoe Mines has signed a non-binding term sheet with Orion Mine Finance, a leading international provider of production-linked stream financing to base and precious metals mining companies, for a USD300-million gold, palladium, and platinum streaming facility.

Ivanplats has appointed two prominent, international commercial banks – Societe Generale and Nedbank – as mandated lead arrangers for a senior project debt facility of up to USD120-million. Both the stream financing and project debt facility will be used to advance the development of Ivanplats’ tier one Platreef palladium, platinum, rhodium, nickel, copper and gold project in Limpopo province, South Africa, toward initial production.

The Shaft 1 changeover at Platreef is progressing to plan and is on schedule for commencement of rock hoisting early in 2022. According to Ivanplats co-chairs Robert Friedland and Yufeng ‘Miles’ Sun all equipment for the shaft changeover has been procured and is on site. 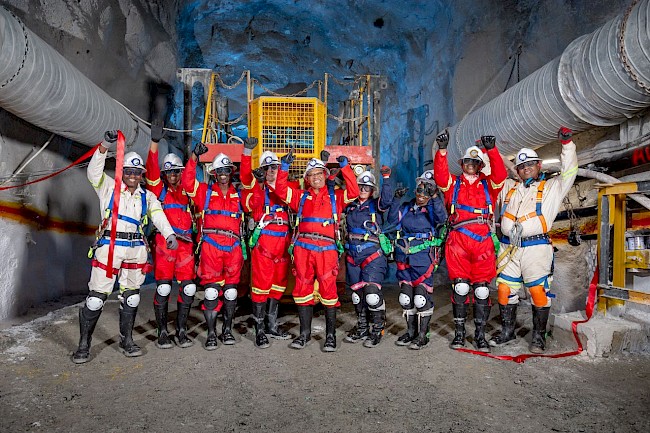 The detailed engineering designs for the shaft changeover have been completed, reviewed, and approved. The changeover work within the shaft will be conducted by Platreef’s experienced owners-team. The winder that was used to successfully sink Shaft 1 will be converted and re-equipped to function as the permanent rock, personnel and material winder for the life of mine. The shaft will be equipped with two 12.5-tonne skips (with hoisting capacity of 4 825 000 tonnes (per year) and an interchangeable cage to accommodate the movement of personnel and materials up and down the shaft during the initial phase of mining.

The shaft will be equipped using rope guides for the main rock, personnel, and materials conveyances. The stage and winder ropes used during the sinking phase have been removed, and the equipping stage, new permanent guide-ropes and the new permanent hoisting ropes have been delivered to site.

Further to this, an auxiliary winder will be installed to mainly function as a man winder during the main rock-hoisting cycle. The construction of the winder foundations is underway and will be completed in time for the auxiliary winder installation and commissioning. The head gear, both winders, equipping stage, conveyances and control systems will comply with the highest industry safety standards, with proven and tested safety and redundancy systems in place.

Newly-designed rock chutes will connect the conveyors feeding the concentrator plant and the waste rock area, from where the rock will be converted to cemented back-fill and also used for protection berms to contain storm water and reduce noise emissions. The new ropes and the newly-designed and constructed equipping stage will be installed in the shaft by specialist contractors. The equipping in the shaft barrel is scheduled to commence at the end of March 2021 for completion by end of February 2022. Following the completion of the changeover work in the underground stations, and establishment of the ore and waste passes, lateral underground mine development will commence toward high-grade ore zones.