After limited growth in recent years and interruptions during Covid-19, global uranium production is set to increase by 3.1% in 2021.

According to Vinneth Bajaj, associate project manager at GlobalData, uranium production worldwide is expected to reach 51.2kt in 2021, thanks to the return of production at Cigar Lake in Canada and other mines suspended during 2020. 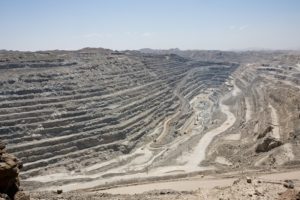 The Rossing uranium mine in Namibia. Photo by: Wikipedia

Output growth from Kazakhstan (+15.5%) and Russia (+5.2%) will contribute significantly to the overall growth, according to GlobalData, a data and analytics company. In contrast, production will continue to decline in Australia (-21.2%) due to the closure of the Ranger mine.

“Global uranium production has been limited in recent years, mainly due to a sluggish market. This was further impacted by the Covid-19 pandemic from early 2020. In fact, global production of uranium fell by 9.2% to 49.7kt in 2020. The most significant declines were observed in Canada (43.9%) and Kazakhstan (14.6%) – globally, almost 60% of uranium originates from these two countries,” says Bajaj.

In March 2020, Canada’s Cigar Lake mine, which accounts for 12-13% of global production, was suspended to contain the Covid-19 outbreak. The suspension stayed in place until September 2020 but was later halted again in mid-December 2020 because of the increasing risks.

It reopened in April 2021. In April 2020, Kazakhstan reduced activities for nearly four months at all uranium mines across the country. The pandemic also led to restrictions in other countries, including Australia, Namibia, and South Africa. Gradually, however, restrictions began to ease towards the end of the third quarter, with several companies resuming production activities.

With potential open pit uranium mines, Namibia is also expected to remain a prominent supplier of uranium to the global markets. Furthermore, the restart of Cigar Lake, in April 2021 is expected to provide a much-needed boost to Canada’s uranium supply.”

The impact of the Covid-19 pandemic on the global nuclear industry was relatively minimal because of an early implementation of safety measures, thereby ensuring operations continued with minimal disruption.

Bajaj notes: “These actions enabled companies to effectively manage their workforce and resources required to keep operations running. The refuelling of reactors normally takes place in every 12 to 18 months (unlike conventional fossil fuel plants that require constant supply), even when strict social restrictions are in place.

Meanwhile, planned outages and expansion works at many reactors were delayed during early 2020 and, instead, companies focused on electricity generation anticipating higher demand later in 2020.”

There has been recent optimism surrounding the global nuclear industry, with several governments incorporating nuclear energy within their plans for reaching climate goals. For instance, the US is currently evaluating extending the operating life of its nuclear power plants for up to 100 years. The plants were initially licensed for up to 40 years, but this would permit renewals for up to 20 years with every renewal application.

Other countries such as China, Japan, and South Korea, as well as the EU, all upgraded their climate change policies during 2020, indicating higher demand for nuclear power going forward – alongside higher electricity generated from sources other than coal.