It has been over two decades since AfriSam began accelerating its efforts to reduce carbon emissions from its cement production. This has put the company ahead of the pack, allowing it to reduce the carbon dioxide produced per ton of cement by some 30%. The replacement of clinker with other cementitious material has been one of the key aspects of this success.

Hannes Meyer, executive cementitious at the company, highlights that the energy consumed in producing ordinary Portland cement (OPC) can be 20 to 25% higher than a composite cement, of the same strength class, containing a cementitious extender.

“This results from the added cost of producing a higher percentage clinker at high temperatures used per ton of composite cement manufactured,” says Meyer. “Extenders like fly-ash or ground granulated blast furnace slag (GGBFS) can be blended into the mix, reducing the amount of clinker milling required per ton of cement.”

This has more recently become a focus for other players in the market, even those who had previously not embraced the concept of composite cement, he notes. The company has in the meantime become a benchmark for these cement innovations, along with a range of sustainability initiatives to monitor and reduce carbon emissions.

“A vital aspect of our use of extenders has been our ability to activate these materials for greater reactivity,” he says. “Through evolving our chemical and mechanical activation methods, we achieve a more reactive product – allowing us to progressively replace more and more clinker while retaining high cementitious quality and strength performance.”

In another stream of the company’s research, it has taken strides in developing the reactivity of clinker itself. By changing the mineralogy of clinker, its reactivity can be improved. Meyer points out that cement blending companies have already recognised the high reactivity of their cement, with many of them preferring AfriSam’s products as they ‘go further’ in a blending application. 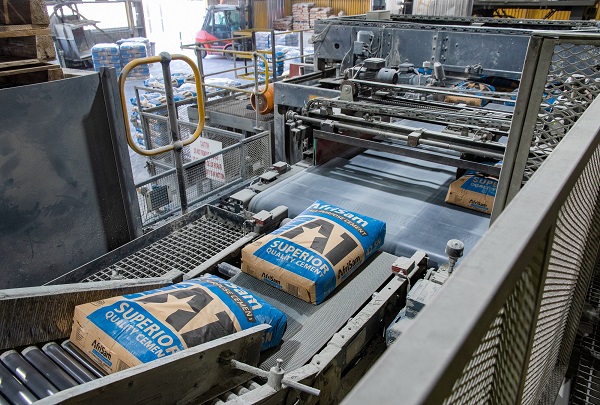 Energy consumed in producing composite cements can be 20 to 25% less than Ordinary Portland Cement (OPC), of the same strength class. Image credit: AfriSamSA

“We have also had great success in the use of grinding aids in our milling processes, collaborating closely with specialist firms to address our exacting requirements,” says Meyer. “These grinding aids are specific to the extenders we use, helping to improve reactivity and in some instances adding 10% to 15% early strength enhancement.”

The end result is that less clinker needs to be produced per ton of final product, he emphasises, leading to less carbon dioxide being generated. The company has also become more efficient in the use of thermal and electrical energy in its processes. Whereas electricity used to be a minor cost in cement plants, it is now a major factor in cement manufacture. In this context, the company has also explored alternative fuels, which have become a major focus for many cement producers globally.

“We have made progress with responsibly disposing of waste products in our energy generation strategies, and we hope that government will take the necessary steps to allow us to expand these initiatives,” he says.

This includes the combustion of waste tyres and industrial carbon sludge, using high-efficiency multi-channel burners that reduce hazardous emissions. He says the employment of increasingly sophisticated process control technology is also part of the ‘AfriSam Way’ towards a sustainable planet.