Engineered to improve classification and separation in arduous applications, Weir Minerals’ Cavex classification hydrocyclones have added value to two more African mines; one is a gold mining operation and the other mines fluorspar. 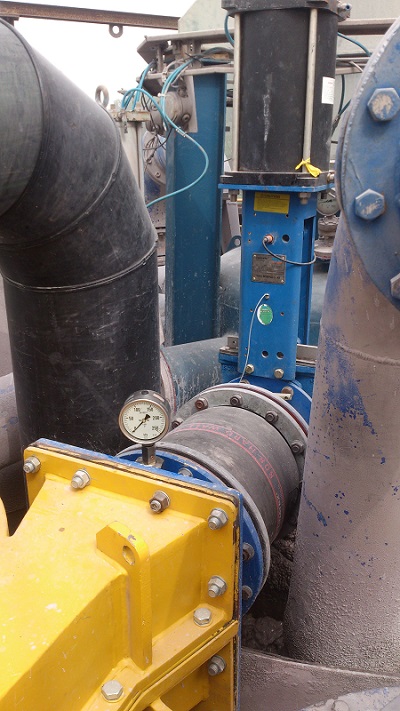 A pressure gauge is fitted to each Cavex hydrocyclone, shown here with the Linatex slurry hose and Isogate knife gate valve. Photo by Weir Minerals

There was also 50% longer wear life on the units’ liners compared to the competitor’s cyclones, and a 33% wear life improvement on the spigot. The mine had turned to Weir Minerals Africa after experiencing low recovery, with considerable coarse gold settling in the tanks.

The mine required a solution that would achieve a P80 cut point of 120 microns or finer, while the incumbent hydrocyclones were achieving only 53% passing 106 microns. After analysing the situation and generating simulations, the Weir Minerals Africa team recommended two Cavex 700CVX13 hydrocyclones and installed them into the mine’s existing infrastructure. The units were the first of this model to be installed in Africa.

A range of vortex finders and spigots attached to the hydrocyclones further optimised their performance. Test results after six months confirmed that they were achieving 85.5% passing 106 microns in the overflow, compared to the 50.5% achieved by the mine previously. As a result of the Cavex 700CVX13 hydrocyclones’ improved Total Ownership Cost (TOC), the mine intends to retrofit the balance of the cluster with these units.

In another success story – this time in South Africa – Cavex® hydrocyclones have improved separation efficiency and provided a finer overflow product at a leading fluorspar producer in Limpopo province. The existing flat bottom competitor cyclones in the mine’s secondary mill circuit were found to be unsuitably sized and were achieving a coarser grind to the overflow for downstream processing.

The Weir Minerals Africa team identified the Cavex 400CVX10 hydrocyclone as the best equipment for the application. Not only are these hydrocyclones able to raise the efficiency of classification and separation, but improve overall wear life due to the reduced turbulence of the 360-degree laminar spiral inlet.

The Cavex hydrocyclone cluster achieved a higher separation efficiency by reaching the required P90 cut point of 90 microns, reducing the stream of coarse particles to the overflow stream. The result was that the mine increased its mass recovery feed to the flotation circuit by 4,9%.

So satisfied was the mine with the performance of the Cavex hydrocyclone that it ordered another four-way Cavex 400CVX10 cluster for its new mill. It also ordered four Cavex 250CVX10PU tailings hydrocyclones to replace the incumbent competitor product, as well as another for the product dewatering stream circuit.