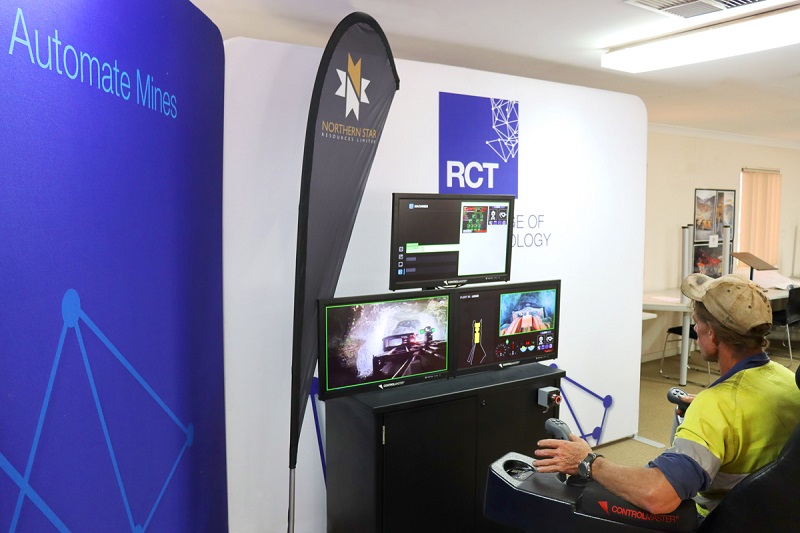 One of the operators during the autonomous technology trial. Image credit: RCT

In early October, RCT set up a ControlMaster Automation Centre at the Western Australian School of Mines (WASM) in Kalgoorlie with a network connection to an underground loader equipped with ControlMaster Guidance Automation at the East Kunduna Joint Venture (EKJV) mine.

The project to set up a Remote Operating Centre (ROC) was a combined effort by technical specialists from RCT and Northern Star Resources. Once operational, a Northern Star Resources equipment operator controlled the ControlMaster Guidance Loader from the WASM Kalgoorlie facility and resumed site required remote production rates.

The trial is a history-making event for the Goldfields region and represents an exciting opportunity for both Northern Star Resources and RCT and what can be achieved through the use of Smart Technology.

RCT Kalgoorlie Branch Manager Rick Radcliffe said the trial was an overwhelming success. “We have a very good relationship with Northern Star Resources and when RCT approached Northern Star Resources about the possibility of utilising the Automation Centre from Kalgoorlie, they were only too happy to accommodate this request and put systems in place to make it happen,” Radcliffe said.

“This trial has helped both businesses to understand what future opportunities there are in autonomous technology which is not only exciting for both business but the local Goldfields community as well.”

“To conduct the trial from the WA School of Mines is also a story worth sharing with the wider mining and METS community, to showcase the great innovation coming from the west Australian goldfields region.”

“ROCs represent great job opportunities for members of the labour force who traditionally would not be able to work on a mine site due to various lifestyle or personal factors.”

“Remote Operating Centres are proven for surface operations, but this advancement for an underground application is a significant development led by RCT in the Kalgoorlie Goldfields. Northern Star Resources encourages continual improvement and innovation, and we are very pleased with RCT’s commitment to developing practical mining solutions.