Atlas Copco’s new GA 22 – 37 VSDs (Variable Speed Drive) air compressor range raises the bar on performance, reliability and connectivity delivering energy savings of up to 60% and an increase in Free Air Delivery (FAD) of up to 21%, (compared to fixed-speed models).

Atlas Copco revolutionised the air compressor industry with the introduction of VSD technology. This global first meant that compressors could do something they had never been able to do before – match their motor speed to fluctuating air demands, realising exceptional energy savings and reliability. Later, Atlas Copco brought improvements to this technology with the VSD+. Now, Atlas Copco once again sets new standards in VSD performance with the launch of the new VSDs air compressor series.

Atlas Copco Compressor Technique’s Business Line Manager for Industrial Air Division, Zandra van der Westhuizen, points out, “The 80% heat recovery capability and advanced connectivity features of these machines further boost efficiency levels, assisting customers and end-users in attaining their sustainability and productivity goals. The efficiency of our VSDˢ compressors delivers a solution for users who demand more efficient products to ensure their compliance with ever-stricter environmental legislation. It also meets the needs of environmentally responsible companies that strive to address climate change and preserve the planet.”

The machine increases availability and maximises uptime for uninterrupted production while also curbing maintenance costs. Moreover, the air compressors’ smart connectivity features and options deliver all the advantages of the Internet of Things (IoT). “Considering that over 80% of a compressor’s lifecycle cost results from the energy it consumes, and that compressed air generation can account for over 40% of a plant’s total electricity, the unprecedented efficiency of our new GA 22 – 37 VSDs series is unarguably a game changer.”

To achieve this industry-leading efficiency and performance, Atlas Copco engineers worked tirelessly, scrutinising every individual compressor component to determine where improvements could be made and how existing systems could be innovated. The drive train, the centre of the VSDs series, has been entirely re-engineered by the Atlas Copco R&D team. It consists of the powerful combination of an element or air end powered by an IE5 FASR ultra-premium efficiency motor. Atlas Copco developed a completely new element in-house. 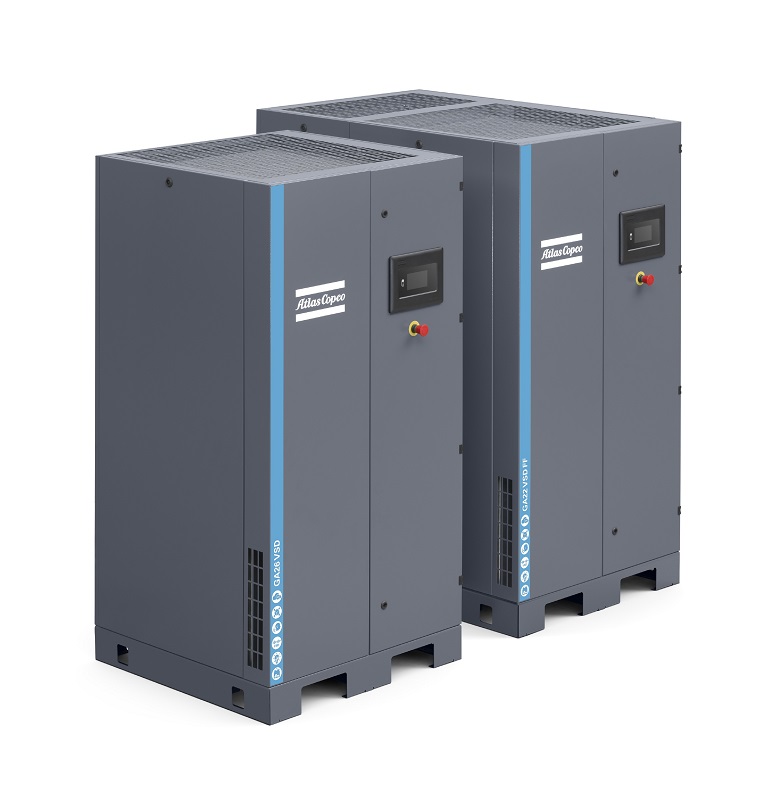 A first for a compressor

Other ground-breaking innovations from Atlas Copco that position the series in a league of its own include the incorporation, for the first time ever in a compressor, of a Ferrite-Assisted Synchronous Reluctance motor. Unlike traditional Interior Permanent Magnet motors, the rotor uses ferrite materials to help preserve precious resources. A massive reduction in the amount of energy needed is thanks to Neos Next inverter technology while the Boost Flow Mode allows users to safely boost their air compressor. This enables VSDs compressors to temporarily exceed their maximum capacity when stretched to the very limits by production demand, without the cost of losing pressure.

Recognising the direct impact of oil temperature on the performance of lubricated compressors, Atlas Copco has introduced a revolutionary alternative for traditional oil cooling systems. The in-house developed Smart Temperature Control System acts as a heater or cooler as needed, ensuring an optimal oil temperature in the GA VSDˢ compressors at all times.

The Elektronikon Touch controller offers a host of control and monitoring options as well as smart algorithms to optimise the GA VSDs compressor’s performance. Thanks to the innovative SmartLink platform, all this is remotely accessible, helping the wireless air compressor to perform better. By connecting with the Elektronikon controller, SmartLink enables users to monitor their compressor’s operational parameters in real time while also keeping an eye on 30 data points – from pressure and temperature to operating mode and running hours.

Atlas Copco, as an industry leader, is committed to the seamless, secure and optimal integration of compressed air systems into the connected production.  “Consequently, we are the first manufacturer to offer OPC UA-enabled (Open Platform Communications Unified Architecture) in compressors,” says Van Der Westhuizen. This machine-to-machine communication protocol is developed specifically for industrial automation and is a universal language for machines in a production environment. “Our fully OPC-UA-enabled GA VSDˢ compressors are able to connect and communicate with other production equipment in the plant. Thanks to this connectivity, users can integrate their GA VSDs securely in their production network to achieve true system performance and efficiency.”

Atlas Copco’s engineers have managed to include all these components and technology innovations into the machine while still maintaining its vertical build and small footprint, ensuring easy, flexible installation. In addition, these IP66 (dust and dirt protection) compressors deliver sound levels as low as 63 dB and can thus be placed on the production floor, eliminating the need for a compressor room.