A powerful fragmentation analysis tool is a highlight of Maptek PointStudio 2020 geospatial modelling and reporting software, released to customers this week. 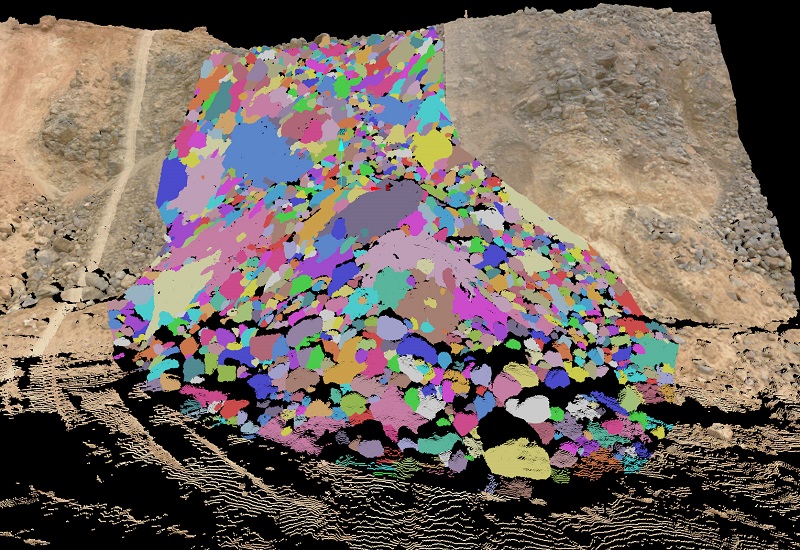 According to Jason Richards, group product manager mine measurement at Maptek a better understanding of fragmentation can account for phenomenal downstream cost-efficiencies, with implications for many aspects of an operation.

“Sub-optimal fragmentation is immediately associated with inefficient excavation and haulage,” says Richards. “Undue damage to crusher parts is another impact. Excessive energy usage, crusher downtime due to wear and tear outside of planned maintenance and delivering out-of-specification product are directly linked to operational performance.”

PointStudio Fragmentation Analysis allows KPIs to be achieved consistently. Individual rocks can now be modelled from scanning of muck piles and draw points to provide accurate fragmentation S-curves from blasting or caving operations.

The new tool allows blast engineers and surveyors to quickly assess the condition of blasted rock, ideally before the material heads to the crushing process. Oversize rocks can be isolated for more effective haulage and processing.

“A simple scan provides a table where rocks outside of spec can be identified and dealt with before the material gets anywhere near the plant,” says Richards. “A unique feature allows editing rocks or fines in the 3D view and characterising any that are not correctly defined,” he adds.

Visual and tabular reporting is understandable at a glance so rock can be fed with optimal dimensions for crushing. Fragmentation analysis on 3D data is considerably more powerful and intuitive than methods that rely on analysing imagery. For operations with Maptek BlastLogic, the digital output can be used to compare actual to predictive fragmentation for continuous improvement of drill & blast processes.

Fragmentation Analysis is a paid add-on. Many other new and enhanced features will be delivered to existing customers for free in their PointStudio 2020 update.

“We’ve made it possible for fully registered scans to be imported from the scanner controller tablet into PointStudio,’ said Richards. ‘Subsequent scans can then be registered with a single click as they are acquired,” says Richards.

Surveyors can immediately start interrogation, analysis, and modelling in PointStudio. An additional benefit derives from field access to aligned scans, allowing timely checks for survey coverage before moving to the next position.

Mine operations commit significant effort to the capture and measurement of as-built data for working faces and stockpiles.

They can’t afford to let data inaccuracy and inefficient processing prevent them from getting full value from their survey data. Bad data can lead to poor productivity and risks bad decisions based on incomplete information.